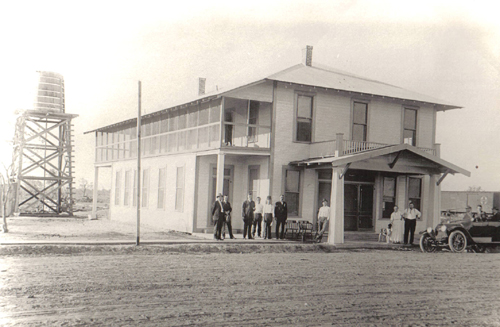 Three Rivers traces its beginnings to July 4, 1913 with a grand opening and first sale of land by Charles R. Tips. Tips, a University of Texas graduate and employee of the First National Bank of Seguin, came to the Brush Country at the urging of Mrs. Annie Hamilton of Cuero. Mrs. Hamilton owned a tract of land where Three Rivers now sits. The fledgling community was named Hamiltonburg, until the U.S. Post Office insisted that the name was too similar to “Hamilton”, thus the change. Tips suggested Three Rivers because of the nearby confluence of the Atascosa, Frio and Nueces Rivers. 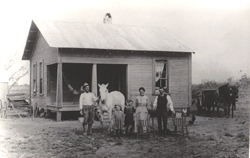 The establishment of the Three Rivers Glass Company in 1922 was one of the most significant chapters in Three Rivers’ history. The factory was established after the discovery of large deposits of Quartzone sand just north of Three Rivers. Quartzone sand is essential to the production of high-quality glass.

Although the company had financial ups and downs it managed to capture a major share of the Texas commercial glassware market before its sale to a major competitor in 1937 and its ultimate closure. Examples of some of the bottles and jars made in the factory can be found in Three Rivers antique and collectibles shops.

Today Three Rivers is a prosperous community of 2,000, many of whom work at the Three Rivers-Valero Refinery, originally Three Rivers Refinery started in 1933, or the Federal Bureau of Prisons Correctional Institution. 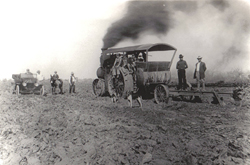 Live Oak County traces its history to 1856 when it was officially organized. The county seat was in Oakville until January 1919 when the citizens voted to move it to George West. There are 12,000 residents of Live Oak County with 2,000 living in Three Rivers and 2,500 in George West. Principal industries include farming, ranching, oil and gas production and tourism (principally hunting and fishing.)

When the first frames of “Pearl Harbor” flickered across the Rialto’s big screen on June 22, 2001, it was the culmination of months of planning and hard work–not to mention the dreams of many in the small town of Three Rivers. First opened in 1948, the theater was the hang-out for two generations of Three Rivers’ families–the venue for countless first dates and dreams of yesteryear.

The theater closed in 1981. Nearly 20 years later, the building was purchased by the Three Rivers Economic Development Committee, who provided funding for the restoration of the theater.    The Rialto was the only operating movie theater in a three-county area.

Vintage movie memorabilia and old photos of the Rialto can now be found in the refurbished, two-screen theater.

The exterior was restored as closely to its original appearance as possible, using the original neon marquee.

The Rialto has hosted many special events since its re-opening, including weekly kid’s movies, special holiday film showings, and a first anniversary party that featured a “movie under the stars.”

The theater may also be leased for parties, meetings, or presentations; it features a video and power point projectors for corporate meetings and advertising.